World of Warcraft: Classic Launched One Year Ago Today

World of Warcraft: Classic launched one year ago today, August 27, 2019. This was Blizzard's first attempt at restoring an archival version of Warcraft, allowing players to reconnect with their friends from decades past and relive their first steps in Azeroth.

World of Warcraft: Classic Launched One Year Ago Today

World of Warcraft: Classic launched one year ago today, August 27, 2019. This was Blizzard's first attempt at restoring an archival version of Warcraft, allowing players to reconnect with their friends from decades past and relive their first steps in Azeroth. The launch of WoW Classic was a success by all industry metrics, doubling WoW's active users from summer 2019.

Let's go back in time!
For starters: most of us have experienced the "Day 1" of Wow Classic! It was almost impossible to make 1 quest without a troll or orc friend stealing the monster in quest ! And at this level : No way to make a group, the experience was really ridiculous. Some of them would go in groups of 5 to face the boars of level 5 -6 thinking they would gain more time ! 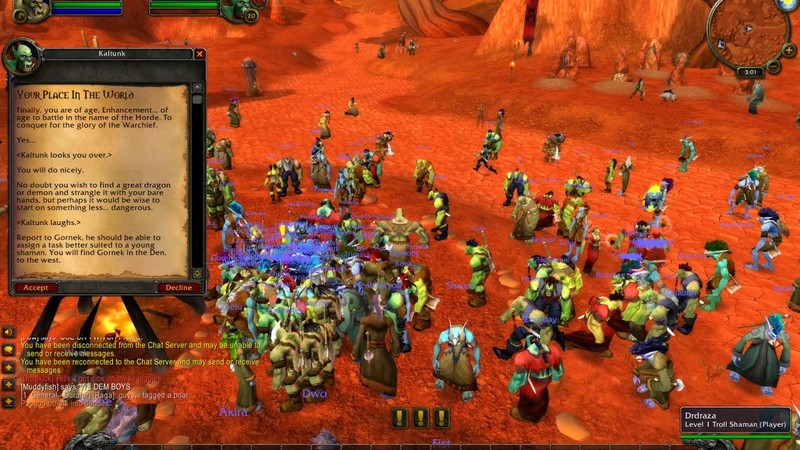 Once our leveling was done on our side, the Horde and the Alliance found themselves in the 1st wild PvP zone very famous at the time of Vanilla: The Strangleronce Valley! 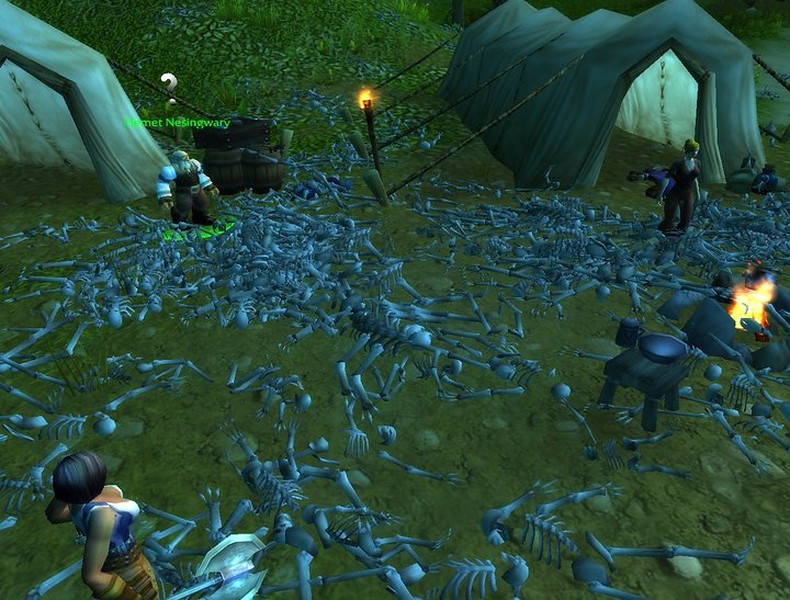 The bigger players could be happy to have gotten a head start on leveling so that they could camp out all the new little players who just wanted to give their quest and move on to the next one : Big mistake! If the camp was owned by the opposing faction: you had to come back later to avoid being camped!

Then comes a phase that everyone has both good and bad memories of: Près bis Farm !

These famous items that you had to have before starting your raids in order to be optimized to  down bosses very quickly! Every healer will remember the hours spent in BRD to get their famous trinket heal : Second Wind

Or the mage in Stratholme who had to beat a team-mate to win the Rand to get the Crimson Felt Hat! 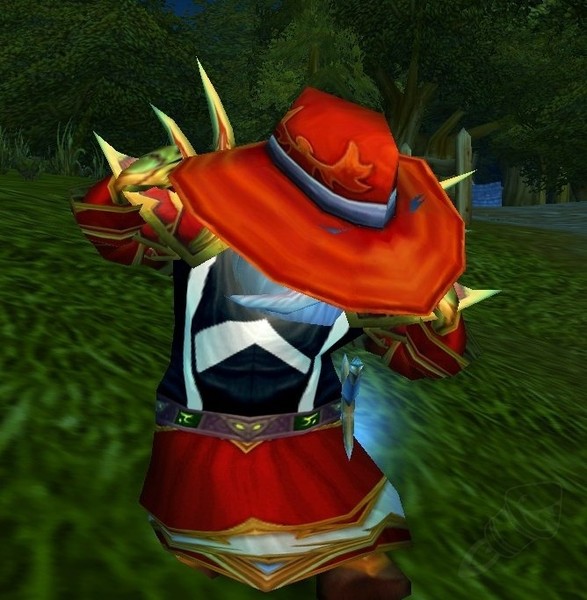 And to finish: our melee companions, who didn't sleep at night because they were so traumatized by this dungeon, some of them never saw them: I mean the legendary weapons Near Bis war / rogue: The Gardienne tribale de Dal'Rend 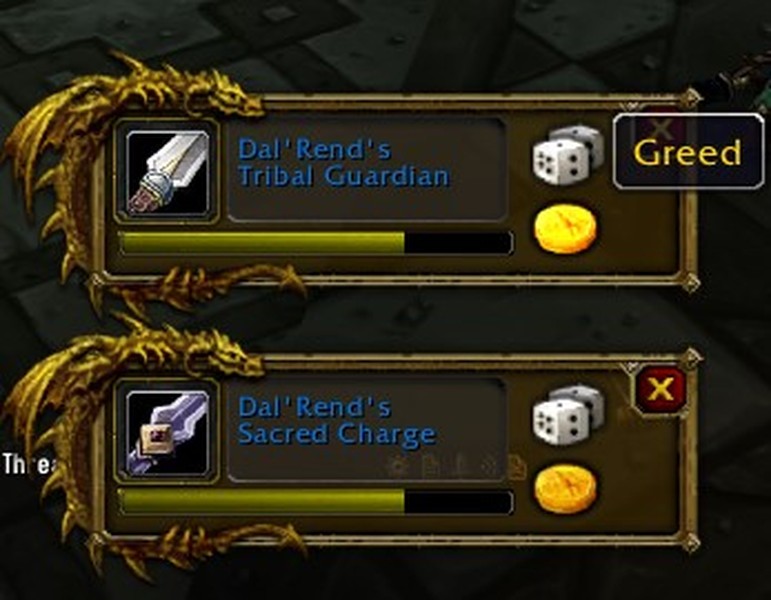 And after this rough farmer phase, we could attack the 2 raids of phase 1: Molten Core and Onyxia!
The nostalgia had its effect: To relive this unique experience of a 40-player raid in the atmosphere of the time was for many players an immense joy, as well as for all those who had not known Vanilla at the time. Killing the famous Ragnaros, an emblematic boss in this game, together with his friends / guildmates will remain an excellent gaming experience.
Let's not forget the remarkable feat of the APES guild, well known to private servers, who killed Ragnaros + Onyxia 6 days after the release of the game! 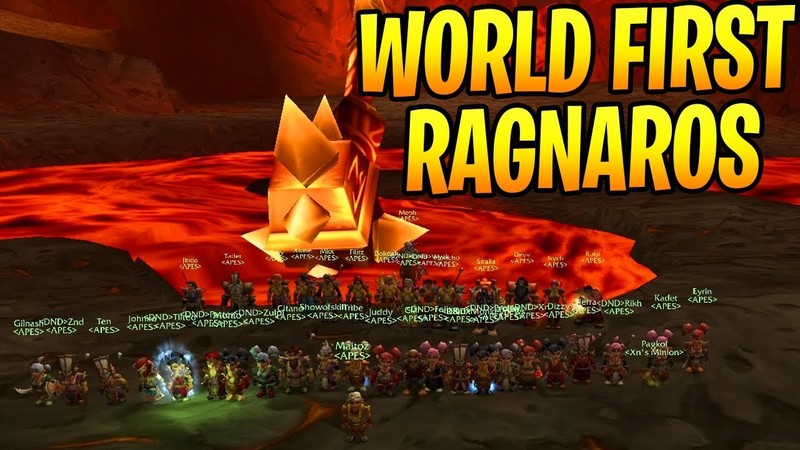 A Few Mounth Later: We are witnessing Phase 2: PvP!
With the release of Phase 2: The ranking system was put in place and each player killed could bring back honour and at the end of the week, depending on your ranking, ranks that would allow you to buy PvP equipment. 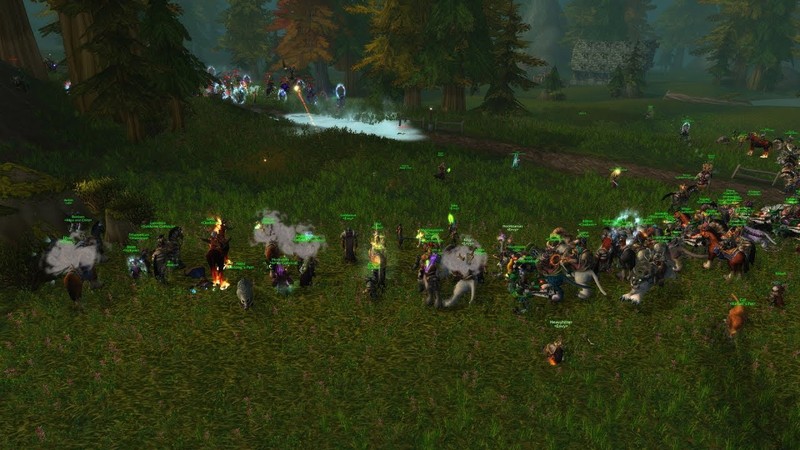 All means to gain honour were used: camping at the enemy fly / waiting in front of the dungeons / killing the same enemy several times.
To continue on the notion of nostalgia, those who were very PvP-oriented were looking for Vanilla's "Holy Grail": Rank 14, the legendary title "Hight Warlord" for the Horde, Grand Marshal for the alliance. A very honorary title for the player, but he needs to devote himself entirely to PvP to be able to hope to obtain this title. 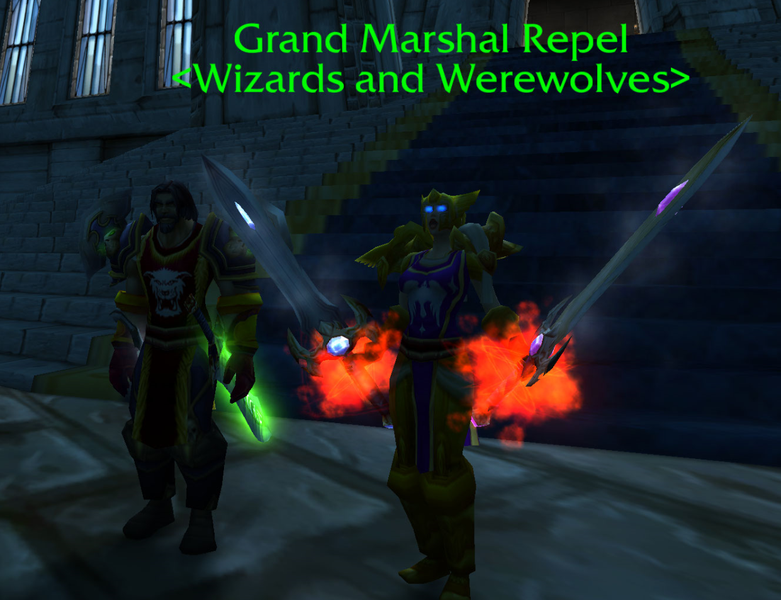 In February, we had Phase 3: the Blackwing Lair, with its famous boss at the end : Nefarian!
The instance was famous at the time for the legendary second boss "Vaelastrasz" who was considered a "Guild Breaker" because of his aggro management mechanics and the need to have a solid DPS to fall him.
But contrary to the time: it was much easier on Classic with the game experience and the equipment of the players which were superior in terms of optimization than the one 15 years earlier. On the night of the launch, 42 minutes later: "Calamity" killed Nefarian! 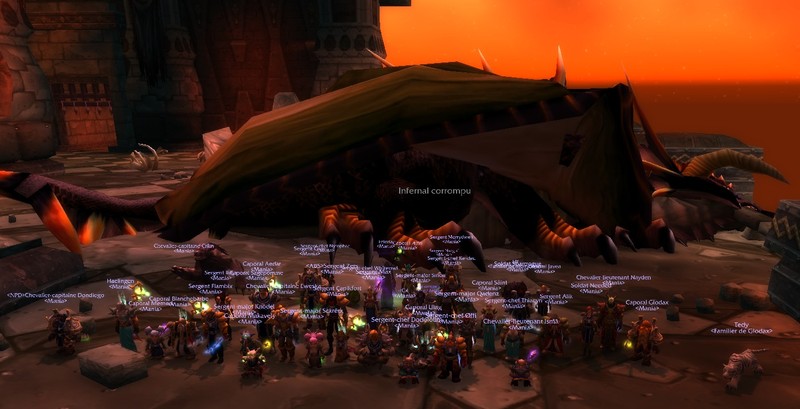 Finally Phase 4 arrived in April with the programme: Zul'Gurub for the PvE content and the battlefield the Arathie Basin for the PvP.
Zul'Gurub is a 20-player raid, loved by the Wow Classic community for its outdoor and natural look, as well as its loot table ideal for both main and rerolls, but also the possibility to loot the famous Swift Zulian Tiger: very famous in the World of Warcraft community. 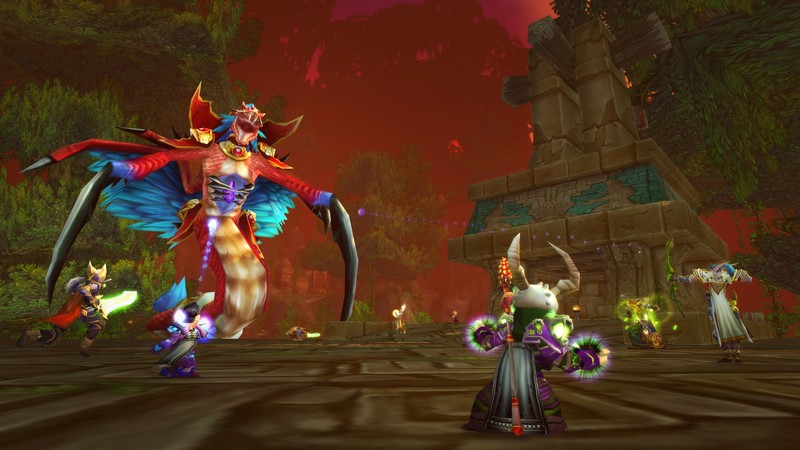 The Arathie Basin was the perfect opportunity for all PvP fans, as well as those who farm the R14 to be able to win the most matches with a good composition and therefore to climb the ranks more easily every week! ( And sometimes a fishing party with the enemy ;) ) 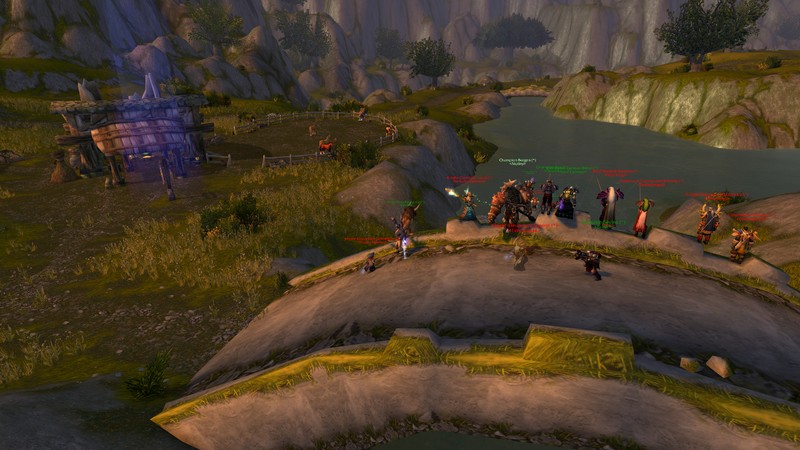 At the end of July, we are in Phase 5 with the release of the Temple of Ahn'Qiraj, a more difficult instance than the previous ones, in 20 and 40 player versions.
For its opening: a collection of components from the 2 factions was necessary. This is the one and only event in World of Warcraft where the cooperation of the 2 factions on a server scale was used to unlock a content.
After the supplies are brought back to Silithus, a 10h event takes place with the summoning of several elites slaughtering everything in the way! 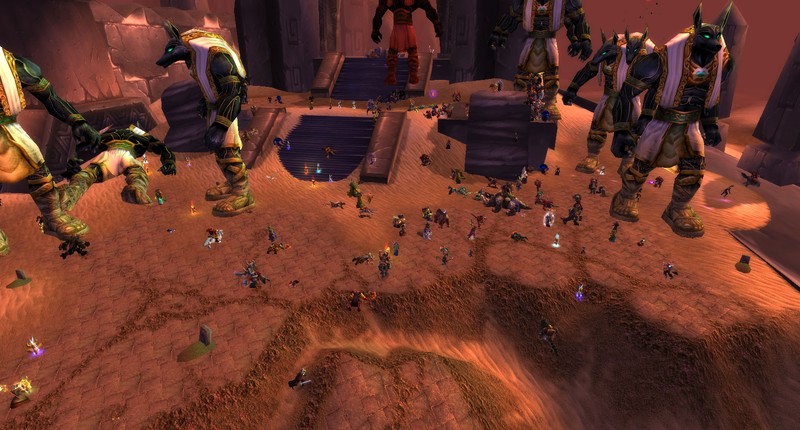 Once this event is over, the doors open and we can go and fight C'thun: The last boss of the Temple of Ahn'Qiraj! 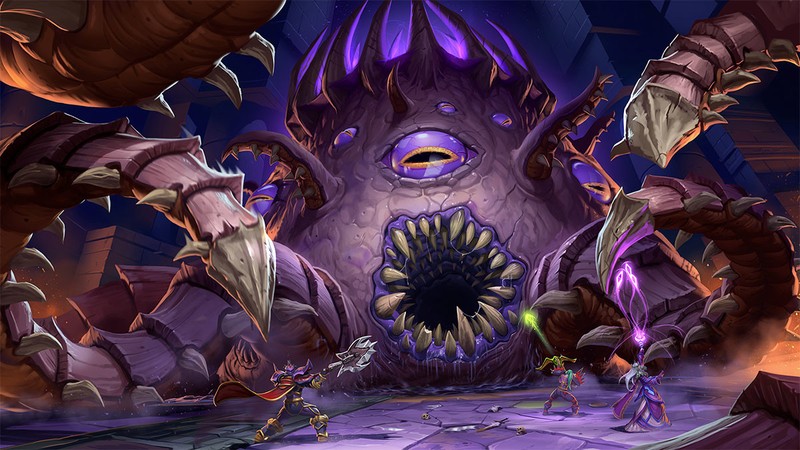 The Wowisclassic team wishes a happy birthday to this game for which we have been creating content since January 2019, and we are getting ready for the last phase of Classic: Naxxramas!
And last but not least : A little word from the Blizzard team ;)

How time flies! WoW Classic launched one year ago today.

On behalf of the everyone at Blizzard, thank you for joining us on this amazing journey back in time that somehow led to the creation of so many wonderful new things. It has been awesome to see the WoW Classic community forge many new bonds and find many new ways to enjoy this game we love.

Along with everyone on the engineering, production, QA, support, and publishing teams, I can’t wait to see what the future holds in store for WoW Classic. We hope we get to celebrate this day with you for many more years!

I want to personally thank all of you for your passion and excitement. Working on this game has been the highlight of my career in software development, and your energy and support are a big part of that.

( even the cranky ones. :slight_smile: )

I’m also going to hop on the WoW Classic birthday hype train and give a heart-felt THANK YOU to all of our players for making WoW Classic such an incredible project to be a part of.

Thanks for being an awesome community, and thanks for always keeping us on our toes!